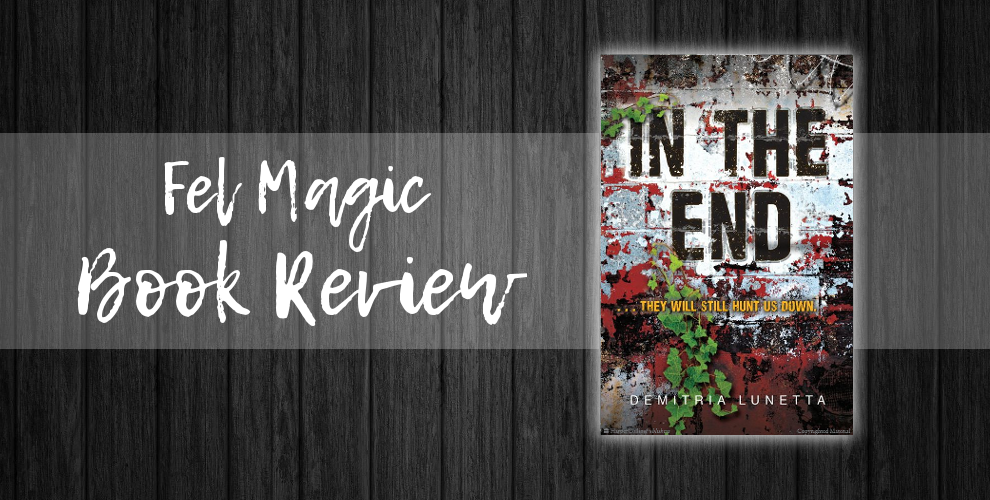 Book: In the End

It’s been three months since Amy escaped New Hope, and she’s been surviving on her own, like she did in the After. Then one day, her former fellow Guardian’s voice rings out in her earpiece. And in a desperate tone, Kay utters the four words Amy had hoped she would never hear: Dr. Reynolds has Baby. Now it’s a race against time. In order to save Baby, Amy must make her way to Fort Black, a prison turned survivor colony, where she will need to find Ken, Kay’s brother. He alone holds the key to Baby’s survival.

But one small slip up could set off a downward spiral that would not only cost Baby and Amy their lives, but threaten the very survival of the people in the After.

Why I Chose this Book:

As the sequel to In the After, I pretty much purchased this book on Google Books as soon as I finished reading the first one. I desperately wanted to know what was happening to the characters.

Considering I gave the first book a fairly high rating, you might be wondering why on earth this one didn’t quite make it to the fourth star. I finally figured out what was bothering me about Amy in the first book and it carried on throughout the second book. It’s her really intense uh…love? I guess for lack of a better word for the character called Baby. Not only does Amy put herself at risk for this person that she cares so much for, she continually puts Baby above everyone else in the book. It’s stifling and frankly, hard to read at some points.

Amy is surrounded by a ton of people that actually want to help and care for her. It is made to seem like these characters are in the way of Amy and are trying to hinder her progress to save Baby from an evil doctor. Amy sees everyone and everything as an obstacle. She puts Baby’s life above her own, above the people she meets and eventually forms friendships with, and above her team members as well. This character flaw was one that was hard to look past as I dove in to the second book.

Now, setting the second book in a prison turned survival camp was hard to read. There are a ton of triggers in this book that I struggled with. Continual physical and sexual assault, graphic violence, graphic descriptions of murder, and graphic descriptions of death were all really present in this book in a way that was absent from the first. There was definitely death, destruction, and violence in the first book, but the descriptions were not so detailed. So, if you are sensitive at all to any of these topics please steer clear. It was hard to not tear up at some parts while I was reading this book at work, and so I had to save it for a strict at home reading experience.

The only other real issue I had with this book that made me rate it lower than the first was the ending was so rushed and so convenient it felt contrived and boring. This massive 400+ page read was all neatly wrapped up in about twenty pages when there was this whole agonizing story that could have been told. I understand this was a two book series, but man…that ending was a real let down. Too simple, too easy, and really not what I was hoping for. Don’t get me wrong, it was nice! It just lacked a lot of depth and closure that I was hoping for.

The great parts of this book are pretty similar to the ones in the first novel. “They” are terrifying and seem to be more brutal now that we know what “They” are. It’s harder to deal with the psychology revolving around “Them” and it really makes you think about the terrifying things going on.

The setting is rich and described so well that you feel like you are in the prison with Amy, or out on the road with her. Lunetta is a wonderful story-teller and her settings are glorious. It was also easy to follow along with the plot. I could put the book down and come back to it four or five hours later and have no trouble picking right back up and sinking right back in to the story. The characters that you are supposed to like are all pretty much amazing and the ones you are not supposed to like are seriously bad. So, in that respect, you have a great mix of people that make the story seem real.

Even though Amy has her flaws, she is still a crazy bad-ass. She can kick anyone’s butt and she is so not afraid of conflict. If Lunetta’s way of making her more human and giving her an issue to get hung up on was giving her this complex around Baby, she makes up for it a bit with how strong Amy is and how much she grows in both books. It’s always a pleasure to read about a girl that can kick butt and take names. Not only that, but Amy’s appearance in the first book is not necessarily described because there is no value placed on beauty really. In the second book Amy is objectified, but that is due to her setting and not necessarily because of her good looks or whatever. It’s nice not to have to read twenty pages about how a girl looks.

The last really lovely thing about this book is that right when you think there is going to be an uncomfortable love triangle situation (which I really do not like reading about…), it is squashed. Again, the last few chapters kind of wrap things up neatly.

Overall, this was an excellent series that took me a total of four days to read. It was a wild ride from start to finish and provided some crazy dream fodder for a week or so, but man was it a great experience. I am impressed that Lunetta managed to develop a dystopian concept that wasn’t so terribly unreadable and was fairly unique in the styling. I try to review without giving away too much and spoiling the fun bits, so hopefully you get the idea that this book was definitely fun to read, but significantly more problematic than the first.

Hopefully you are all having a great week! Let me know what you are reading in the comments! I am searching for more books to fill up January with.

Photo by Janko Ferlič on Unsplash